As you know, I am home schooled. I am taking a class, Environmental Conservation, at the Deering Estate. My teacher is Chris Madden. There are other people that help out, but he is the main teacher. We learn about everything: the mangroves, bugs, animals, the ocean, everything!

One day Chris told us that he volunteers at Everglades Outpost Wildlife Refuge and Rescue. It is in the Redlands. It is a non-profit organization that helps rescue animals. A man and his wife run it.

My teacher told me that he especially likes working with the wild wolves. I told him they are my favorites and that we were thinking about adopting a wolf hybrid but the person who had them said that they would be too much work for me and my little brother.

Chris has a favorite, Loki, a four month old pup. I think he has adopted it but keeps it at the Outpost with the other pups. I told this to my mother and she asked him if we could come out and visit him one day. He was really happy to have us come there and told us he would give us a tour.

Chris brought out the friendliest wolf Rocco. Sunny is tiny compared to him. Rocco was a big goofball. he would roll over and let you pet his belly. then when you were distracted he would pop up and lick your face. because he was raised with humans since he was a pup he is very friendly and submissive. there were other wolves at the park, Cheyenne shy girl and Mokai the alpha male. Cheyenne and shy girl are sisters that had attacked their mother and were separated from her.

Here are some pictures of me and my brother Finn with the wolves and Chris.

This is the wolf Rocco kissing me and my brother.

He was so funny. He kept trying to push into us and lay on us.
When Rocco went back in the pen he immediately ran over to the pack leader, Mokai, and the sisters to let them know he was still part of the pack. Mokai mouthed Rocco and dragged him around. The sisters also jumped on him to show him they were in charge. After a few moments they all calmed and were fine.

I have to tell you about what else we did, even though it is not about dogs. But it was amazing. Chris also gave us a special tour of the alligators that they have at the Outpost. They work with the Gator Boys sometimes. Yep, that’s right, the Gator Boys from TV! Right now they are taking care of about 40 gators from the Gator Boys while they have repairs done to their farm.

Chris gave us a personal show with the gators. he chose his favorite gator, Casper. This gator was about 10 feet long, it was crazy. Chris went into the pond with ten other four hundred pound gators. he got Casper out of the water by pulling on his tail as if it were a leash. He taught us all about the alligators. Did you know that they could stay under water for 6 hours without breathing and live for 6 years without eating if they are large and remain pretty still? This was not even the best part, after he did his show, we got to ride the gator as if it were a horse. When I sat on it, it started walking around. Staying on was tricky. How many kids get that kind of experience? 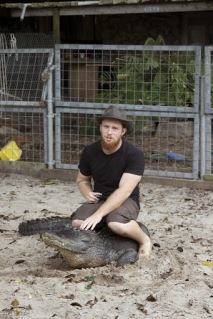 We had a great time and then went for pizza and doughnuts. Although, I am not sure I will be able to top riding a gator!