O, Miami Poetry Festival runs the whole month of April. I posted about the event Leading Poetically that I hosted, but there were other great events. One that was amazing was the Planetary Poems at the Frost Museum of Science Planetarium. They partnered with Tracy K. Smith, the US Poet Laureate, and a graphics company and had her poems created into constellations. As she read (prerecorded) selected poems from her book, Life on Mars, the words appeared in the “sky” and then connections, lines, were drawn between them creating an image that represented the poem. Then the words disappeared and the constellation became animated.

The first one was a dog, but since we did not know that it was going to be that we did not get to video it as it played.

We did get a couple videos which you can see here and here.

We also had some fun before the event. My friend Skye, appropriate name right?, came with us.

We ran through this string sculpture that I had seen before in Wynwood years ago. 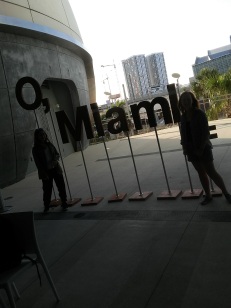 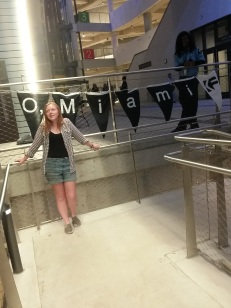 The other event, was called Check Out A Poet. O, Miami arranged for some of us to be available at local libraries for patrons to check us out, like they would a reference book. I was asked to talk at the Miami Dade Public Library South Dade Regional branch in their YouMedia Lab. If you have never been to a YouMedia or YouMake Lab you should go.

Me and another O, Miami Poet went there and spoke to students for about an hour. They asked us questions about our writing style, habits, and how we find inspiration. We also got to read some of our own work.